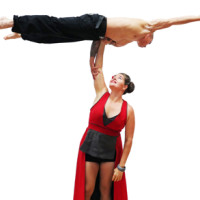 I am rather consumed by injury prevention just now.

I am about to turn 36 and 2015 has turned into a very full year of shows (including a gloriously packed tour of my new show LEAP, which is more physically demanding than anything I have done before) – I intend to arrive at the end of this year in one piece, injury-free and healthy.  I’m doing lots of work to increase my strength and have been researching into injury prevention. This is a summary of some of the brilliant advice and info I have come across in my quest to be a Strong Lady free from injury and in perfect working order.

When I began touring my Strong Lady show back in 2006, there were many voices telling me that the Human Carousel (where i lift 2 men at once and spin them around) was only going to be possible for me for a couple of years at best before injury would strike my back.  They made me scared and so I sought advice – core strength and keeping my back supple were the key, I was told.  Almost 10 years later and my Osteo says my back is in better shape than it was back then, thanks I am guessing, to the Pilates and Yoga combo that was recommended to me at the outset.

The new show, LEAP is a duo acrobatic show which includes hand-to-hand and perch, where I am basing a man of between 60 and 65kg.  My shoulders are the most vulnerable site for injury in this show, so I have been working with a few wonderful experts in different parts of the world to keep them healthy.

When I worked briefly with Mimbre a few years ago, they introduced me to the very enlightened practice of going to a physio at the start of a new project to talk about the specific physical movements you would be working on, having them analyse your body with those movements in mind and then advise you on what you needed to do to keep your body safe.  Sometimes this has been tips on how to execute the movement, sometimes exercises to correct restrictions in your movement or to increase strength or flexibility in certain areas that are deficient for what this new movement will need.  For this process I rely on James at Perform Health in London, as he is a physical performance specialist.

Below is a summary of what has been working for me from advice I have been given and research I’ve undertaken about keeping my shoulders and knees safe this year.  In terms of keeping a healthy back (which has been my focus in the past) I swear by Yoga and Pilates. This is not a very detailed guide (sorry, not an expert yet) just a jumping off point for you to get a few ideas…

Theraband
Small enough to have one with you anywhere you go, these things are magic.  When we train, we can get so busy building strength in the big muscles and chasing increases in weights, that we forget to train the stabilisers.  For me, I was particularly lax in the engagement of my sub-scapularis muscles (the ones that draw your shoulder blades in and down).  I have now got a series of theraband exercises that I try to do for 15-20min / 3 or 4 times a day.  I always use them as part of my warmup before training strength or doing shows.

I will post the exercises here later (though there are plenty floating about online) but for now, these are the tips that have helped me in doing any of the movements:

Fascia Release
I have been amazed at how powerful an impact ‘fascia release’ has on clearing pain, increasing agility and increasing my access to my strength.  I am not an expert and intend to research this more… I have recently been seeing a physio who specialises in this and his results are so fast.  Until I understand it more I will say only that it is a connective tissue, a kind of film that encases every structure in the body, including muscles.  The theory is that it can get kinks, twists and hernias in it which then result in stiffness, muscle tightness and pain.  In the case of the shoulders, it can cause you to move in imperfect ways which put the joint at risk.  To me it seems, again, like magic.

Some ways to release the fascia include:

Balancing your training
Obvious when you say it, but I was not doing it…  Basically, when training strength I was only mimicking the movements I needed for the skills I was performing, but with a dumbbell where a person would be… this is not perfect.  I have been advised that I need to balance all my weights training by performing the opposite movement as well.  Not only does this keep you from injury related to dispropotionate opposing muscles, but also gives you loads more power in the original movement as you have stability behind it.

Another means of keeping balanced in my training is to mostly avoid using machines for weights and stick to free weights (dumbells better than barbells) as you are then incidentally training all the stabilisers as well, rather than the one dimensional tracking of a machine.  This is where I have also been advised to be sure to include a balance of body weight exercises as well as the weights, as these tend to lead to more agility and whole body strengthening.

Mid-range Motion
The theory here, is that in the extremity of a motion is where our joints (shoulders and knees particularly) are most vulnerable.  So the idea is that in training, especially weights training, we should avoid the extremes of the motion in our reps.  If the extreme at one end of the motion (eg. a completely straight leg) is 0 and the extreme at the other end of the motion (eg. calf pressed to back of thigh in a deep squat) is 150, then the advice I was given was to only repeat the movement between around 50 and 100.  So in terms of squats, you would not fully straighten up or lock you legs when standing and would only take your bottom a little lower than knees in the squatting.  In terms of pressing weight overhead, I explained that I needed stability at the extreme of that movement (i.e. arms locked overhead) and was advised that it might be possible to keep a slightly closed shoulder angle in that movement.  Also, when it comes to doing weights etc, if you do your reps with a limited range and you can use isometric exercises for the extremes.

Isometric Exercises
Isometric exercises are strength training where the angle of the joint and length of the muscle don’t change during the exercise.  Essentially you are exerting pressure, while holding the position.  This is what was recommended to me for the extreme ends of the movements that I will limit to mid-range motion (above), and is also useful if you are trying to train or warmup in a restricted amount of space.  As I collect Isometric exercises I will make another post with a long list… for now, the main way I will use this is in training the extremes of motion for overhead press and for deep squats.

Two other isometric exercises I find great are:

Proprioception
Finally, the importance of developing your proprioceptive skills has been highlighted as very important (though I must say it is usually the first thing to drop out of my training when I am busy, as it really feels like you are doing nothing much).  You can find heaps of exercises on google… Basically, these are movements that improve your balance and your sense of where your body is in space… If you are feeling clumsy, these are great to do at the dart of a session to focus your awareness of your body.

Links
Some of the brilliant people who have guided me in this research are: