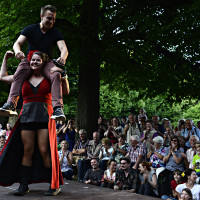 There is a wonderful culture of outdoor arts and street theatre festivals in the UK and Europe and I have been lucky enough to be part of it, with various shows, for the last 13 years.  Showcase festivals are one of the best ways to get your tours rolling.

Many of the best festivals on this landscape will only book shows that the producers have seen live, with their own eyes, or at least heard about from someone they trust who has themselves seen your work.  This is where it becomes exceptionally valuable to take part in showcase festivals.  You can, of course, begin instead by touring to festivals who will book from promo materials and then invite people to see you there – but as festival producers tend to be stretched thin already, the number of festivals they can attend in any summer is limited, so they are more likely to take the time out for a showcase festival where they can see many new works in one place.  I thought that it may be useful if I compiled a list of the best showcase festivals I know of for working in Europe… I have not attended them all, but have at least heard good things about them.

One word of advice from someone who learned the hard way though… be sure that your show is well developed and ready before you go to a showcase… I took a show to one of these festivals too early and it took years to convince some producers to take a second look once the show had developed.

Also (though I have never had the chance to do it myself) I have often seen people take an extra person with them to these festivals as a representative… While you are busy preparing for and doing shows, it can be great to have someone who is free to talk with people who come to see the show.

I have not yet performed at this festival – but it is well renowned as a great showcase with very good attendance of producers from around Europe. The festival is for new talent or experienced companies presenting a new show.  As it is early in the year it can result in bookings for the summer of the same year.  You are not paid for performing here, but the hospitality is wonderful. The application is available online from their website – www.acci.be (or see the facebook page www.facebook.com/gevleugeldestad)

Performance Paderborn International Arts Fair
Paderborn (Germany) in September
I have visited this festival, but not with my on show.  It seemed to me a very daunting place to perform and when I was there it seemed to have more producers than public in the audience for many of the shows – but the turnout of producers was brilliant.  Being late in the summer it can be a perfect place to go at the end of a summer tour of a new show, so you have had the time to properly run it in.  You pay a fee to be part of the Arts fair here if you are accepted. Applications are via their website and usually close in April.  For info – www.performance-paderborn.de

Namur en Mai, Festival des Arts Furieux
Namur (Belgium) in May
When I performed here, very early in the life of my Strong Lady show, I found it to be brilliant and I ended up with a number of bookings for the summer of that year out of it, as well as ripple effects for the next couple of years.  The festival is held in May (hence the name) and you can find info on their website – www.isolat.org

Festival International des Arts de la Rue, Chasspierre
Florenville (Belgium) in August
This festival is well known for being AMAZING.  The setting is gorgeous, the attendance of producers is great… I came here too early with my show and so did not reap many rewards from it in terms of bookings for other festivals… but it was still a fantastic event.  It can be a great gateway festival for work in France as well.  This is possibly not a showcase festival officially,  as they pay your fee as a regular festival booking, but it is a fantastic festival to have your work seen by many people. Info and contact details are at – www.chassepierre.be

Chalons de la Rue
Chalon-sur-saone (France) in July
This is another festival that I am yet to do, but have heard brilliant reports from friends who have been there.  Info is on the website – www.chalondanslarue.com

Vive Cite Festival des Arts de la Rue
Sotteville les Rouen (France) in June
I visited this festival with Mimbre when I performed with them in 2012 – it was a spectacular festival to perform at.  I really can’t say how it was as a showcase as I was reveling in being ‘only’ a performer and having no admin responsibility while I was there.  From what I gather though – it was packed with producers and is one to strive to go to if you would like to work in France.  For info – www.mairie-sotteville-les-rouen.fr/Culture-Viva-Cite-festival-des-arts-de-la-rue-fr

Teatro Y Artes De Calle
Valladolid (Spain) in May
This festival is well attended by producers from around Europe (not just Spain) and is a great place to have your show seen as the audiences are excitable and warm and huge.  Info on their website – www.info.valladolid.es/tac

Firra Tarrega
Tarrega (Spain) in September
Again, like Valladolid, amazing audiences and lots of producers from around Europe (because who wouldn’t want to pop to Spain as the summer rolls into Autumn?).  When I was here I was struck by the chaos of the tiny town that is crammed so full of excited people and amazing shows, and yet how focused the audiences were when you perform.  Info on the website – www.firatarrega.cat

Greenwich and Docklands International Festival (GDIF)
London (UK) in June
I performed at this festival when I was working with Mimbre and have also made a point of visiting it whenever I am free on that weekend, as I am based in London and it is a brilliant program of shows every time.  Not only is the showcase great if you can be booked to perform, but the great people of XTRAX also run an Arts Market and networking events attached to the festival, so you can book in to come and promote your new work there even if not performing.  Sometimes (and I believe 2015 is one of those years) Xtrax also run an event called XTRAX Shorts, where you can apply to present a short talk about your new work to producers.  For info about GDIF their website is – www.festival.org / For info about XTRAX their website is – www.xtrax.org.uk

Kendal Mintfest
Kendal (UK) in August
This festival is in the beautiful Lake District of England and has been hugely supportive to me and really helped in finding tour dates in the UK.  It is taking a year off in 2015 and I keep my fingers crossed that it will be back next year.  You can find info on future events on the Lakes Alive website – www.lakesalive.org